Many don't know that cataracts are the number one cause of vision loss among people 55 and over. In truth, more than 50% of senior citizens have some amount of cataract development.

What is a cataract?

Cataracts occur when the ocular lens, the portion of the eye that focuses light to create images, becomes clouded. The clouding prevents the passage of light that is essential for vision.

Often adults attribute vision loss with age but cataracts do show certain signs that are different from normal age-related eyesight loss. Depending on the type of cataract, symptoms include blurry vision, sensitivity to light or a decrease in color vibrancy. Some types of cataracts show no signs until they are more advanced while others may even show signs of what is known as second sight'' or a temporary improvement in near vision.

The term cataract derives from the Latin cataracta defined as ''waterfall''. This may be because the appearance of opaque clouds in the lens is similar to the cloudy rush of water which also appears white. Cataracts that develop as a result of aging usually start off with an initial opacity in the lens, followed by swelling and shrinkage of the lens resulting in a total opacity and loss of sight.

There is little you can do to prevent cataracts, other than protect your eyes from ultraviolet exposure by using sunglasses. Some research suggests that antioxidants and reducing consumption of salt may also play a role in prevention.

Although initial loss of sight can be helped with visual aids such as glasses or magnifying lenses, at some point vision may deteriorate to a level to require surgery. Cataract surgery is in fact the most frequently performed surgery in America and is typically quite successful. In most cases, the surgeon takes out the opaque lens and implants a clear plastic lens called an IOL (intraocular lens). In nine out of 10 patients, vision is restored to between 20/20 and 20/40.

To ensure early diagnosis and treatment it is important to schedule a yearly eye examination to check for signs of eye diseases such as cataracts. Call our Frisco, TX optometry practice today to schedule your exam. 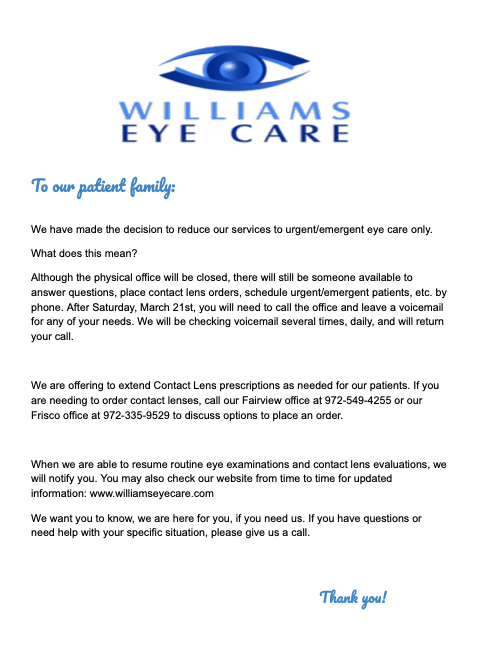